Earls Walks For You… my debrief 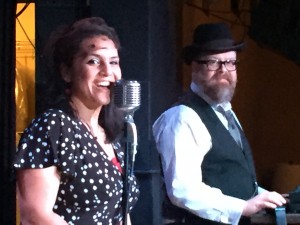 This was an amazing weekend full of music!  It all started on Friday when I was asked to sing a set for the SOWINS’ “Earls Walks For You” FUNdraiser.  I was thrilled!  I got to work with my friend, Tim Tweed who took care of the DJ booth.  We put together a set of walking songs that included I Walk the Line, Walking in Memphis, Walk Like and Egyptian and Tim’s favourite, Walk This Way.  There were so many amazing silent auction items and many SOWINS supporters to bid on them.  The Earls team shone as they were required to move things around to accommodate the huge rainstorm that left a small lake in the middle of the patio where the event was scheduled to take place!  Mike, the Restaurant manager told his story of growing up with a single mom and how tough it was for their family.  He gave his deepest and most sincere thanks for all the volunteers at SOWINS who gave their time so families like his could receive the assistance they need.  Bob Nicholson MC’d the event and Gordon de Roos entertained with his magic… We all had a good time drinking the complimentary beer and eating the delicious tacos provided my Earls.  After Keisha from Boundless Bellydance, it was my turn.  I was a little nervous as it was a bit difficult for me to hear the music over the din of diners.  Tim to the rescue.  I was able to use his DJ headphones to listen to my musical cues.  Pfew!  But then I had to deliver 13 songs totally out of the genre I’ve grown accustomed to… With minimal diction issues, I managed to spit out Walk This Way and Walking on the Sun.  My last song was You’ll Never Walk Alone from Roger’s and Hammerstein’s musical, Carousel.  Just as I was singing this song, the sun came out and a huge rainbow formed across the sky…  I chose this song to close because I thought it really spoke to the theme of walking and it sends a really good message: “When you walk through a storm hold your head up high, And don’t be afraid of the dark, At the end of a storm is a golden sky, And the sweet silver song of a lark, Walk on through the wind, Walk on through the rain, Though your dreams be tossed and blown, Walk on, walk on with a hope in your heart, And you’ll never walk alone…”   All the supporters of SOWINS work hard to make sure that women of the South Okanagan in need of services get what they need and they know they are not alone.  Thank you, Diane Fru from SOWINS who put this whole thing together and for asking me to be a part of this FUNdraiser.  I hope everyone gets out their walking shoes to participate in the Walk A Mile in Her Shoes event July 8th.  As for next year, I just hope we all pay our weather bills so we can be on the patio!

Heard It Through the Grapevine! SAF @ The Rock Oven Restaurant